Leading arbitrator Lucy Greenwood calls for action to address the efficiency, equality and environmental challenges facing the arbitration community in a recent lecture 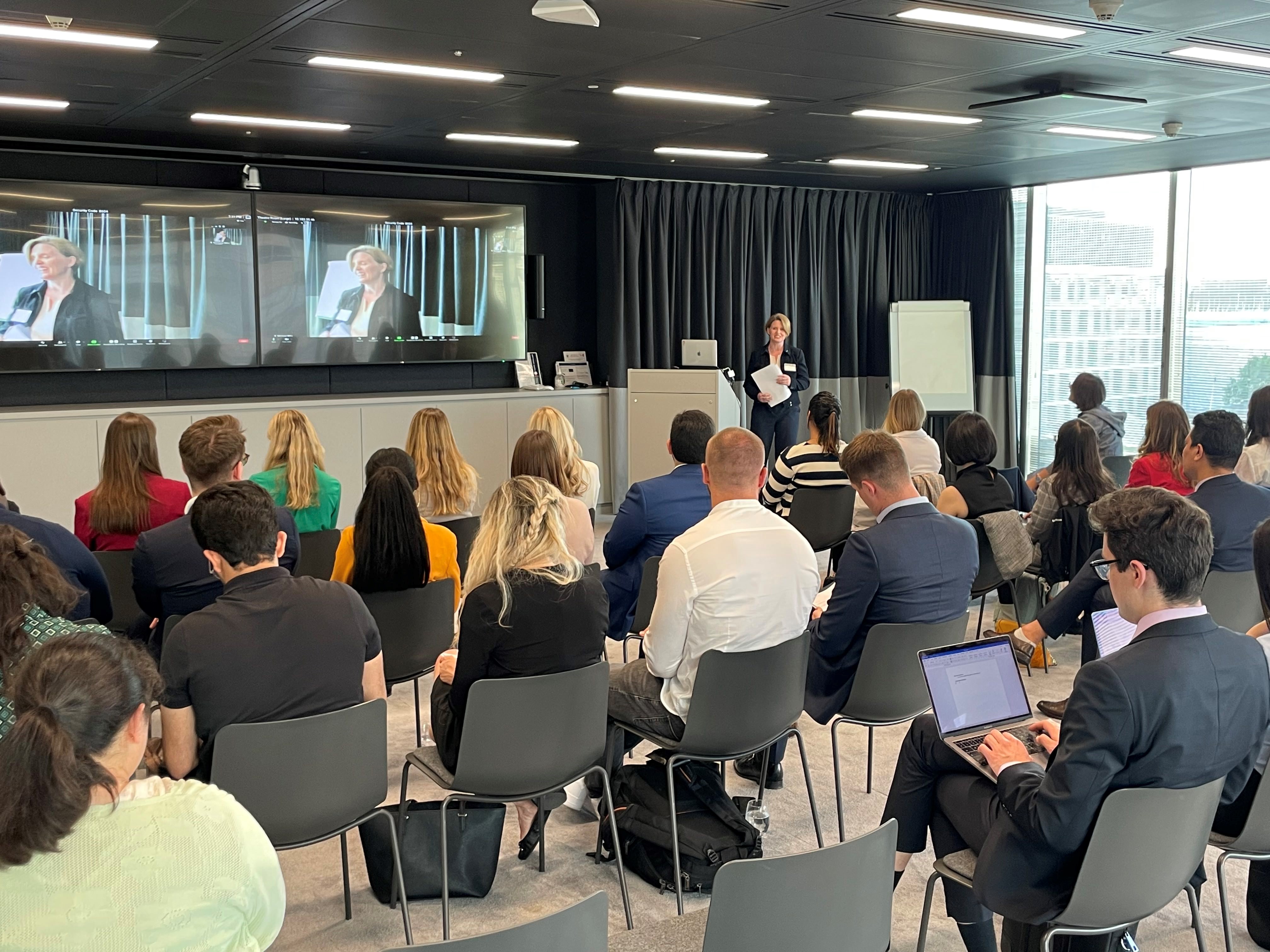 This article was written by Zoe Hughes-Nind, Trainee Solicitor.

On Monday 20 June, the Arbitration Lab London Summer Arbitration School began its 2022 session, welcoming the new generation of arbitration specialists from 34 countries to a week of interactive talks given by well-known practitioners and academics on a wide range of arbitration topics.

Leading arbitrator and founder of the Campaign for Greener Arbitrations Lucy Greenwood, C.Arb gave the opening lecture at the London offices of Osborne Clarke LLP, one of the lead sponsors of the summer school. Greg Fullelove (Head of International Arbitration at Osborne Clarke and a course lecturer) introduced the event and there were interventions by the summer school's leaders, Professor Anna Petrig (of Basel University) and Professor Yarik Kryvoi (of the British Institute of International and Comparative Law).

The lecture itself – titled Arbitration: Diversity, Sustainability and the Spectre of Climate Change – focused on three areas of challenge facing arbitration today: efficiency, equality and the environment.

Ms Greenwood started by pointing to a crucial benefit of arbitration: flexibility. One of the most attractive features of international arbitration is that, unlike in court litigation, parties have an opportunity to adopt the rules and processes that best suit their case and provide the greatest efficiencies.

This is an opportunity that is often not seized, with cases frequently following the same, well-trodden, procedural trajectory. This leads inexorably to the same concerns about the time and costs spent on a case.

As Ms Greenwood noted, the ability to influence real change is in the hands of the parties and their representatives, as well as the tribunal: this, then, was a call for thoughtfulness, reflection and increased creativity on the part of arbitration's actors. In short, procedural flexibility exists: use it.

However, it is widely recognised that while some very significant progress has been made on gender diversity among arbitrators (not least because of the success of the Pledge for Equal Representation in Arbitration), much remains to be done, including in respect of racial and socio-economic diversity.

There is reason for some optimism: the founding of REAL (Racial Equality for Arbitration Lawyers) is a step forward. However, to ensure the arbitration community reaps the benefits of diverse thought and attracts the best talent, Ms Greenwood urged us all – lawyers, businesses and arbitrators – to remain committed to change. It is continual action that is required, not just words.

Ms Greenwood emphasised that the greatest threat to our planet is the damage being done to the environment. She observed that arbitration practitioners have, in the past, perhaps shown less intellectual curiosity about the role that their professional activities play in that damage than might be hoped. It has often been seen as somebody else's problem. Nothing could be further from the truth, however.

One of Ms Greenwood's achievements in the field has been to raise awareness of the destructive impact that the arbitration (and of course, litigation) process itself can have on the environment. Her 2021 report, "The Canary Is Dead: Arbitration and Climate Change" established that a complex arbitration could produce 418,531.02 kgCo2e (which would require planting over 20,000 new trees to be offset). How so? A combination of factors including printed bundles, coffee cups and, above all, flights. All matters that a thoughtful set of parties, advisors and tribunal members could combat. And yet, many arbitrators will still be happy to make orders that lead to unused "walls of paper bundles" at a hearing. Something has to give.

The pandemic has shown the arbitration community another way, with the rise of virtual hearings and the greater use of electronic bundles. This progress must not be lost in a post-lockdown rush to the airport and photocopier. Quoting Barack Obama, "we are the first generation to feel the impact of climate change and the last that can do something about it", Ms Greenwood stated that there is no time for inaction – and that includes the arbitration community.

Ms Greenwood suggested an easy way for any practitioner take action: to adopt and (crucially) implement The Green Pledge. This set of guidelines devised by the Campaign for Greener Arbitrations explains how to conduct a more climate-friendly arbitration. Businesses can also take action, such as adopting an efficient and environmentally conscious dispute resolution policy, as Osborne Clarke has previously covered. But, she added that individual self-reflection would also help: is the flight/copying/non-recyclable coffee cup necessary?

Ms Greenwood finished by underlining the power of individual action: encouraging the celebration of good behaviours and the criticism of poor practice. Whether it is adopting a more streamlined arbitral procedure, suggesting a diverse pool of possible arbitrators to a business or holding a hearing virtually, the tools to create change are in our hands, and she urged us to use them.

The Summer School plans to publish a video of Ms Greenwood’s opening lecture on the Arbitration Lab website.